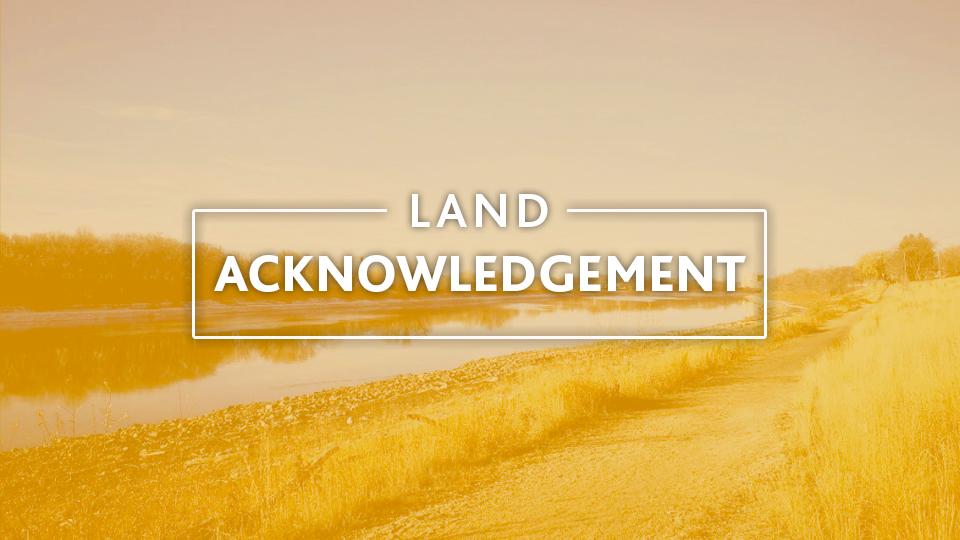 Last time you were in a Red River Co-op food store, gas bar or pharmacy, you might have noticed some beautiful new artwork adorning the walls or windows. As one step in our journey towards truth and reconciliation, we have installed land acknowledgement signage to remind ourselves and our members and customers of the history of the land we live and do business on.

We were fortunate enough to collaborate with local designer and illustrator Leticia Spence on this project. Please read their thoughtful rationale for the design’s details below: 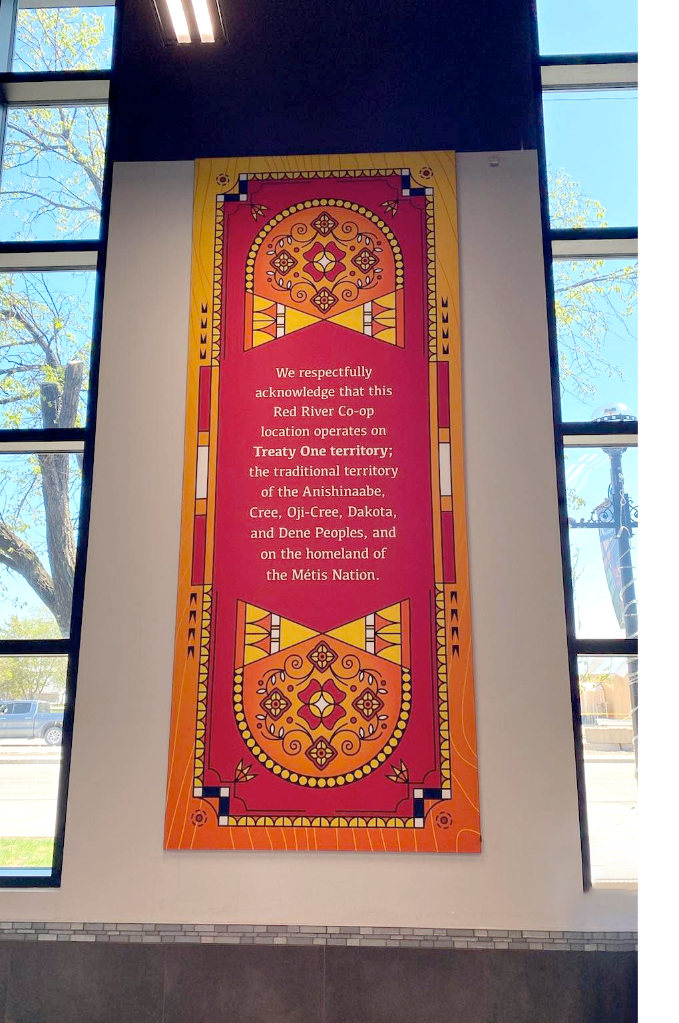 The Land Acknowledgment sign takes inspiration from beadwork. Beadwork is a significant visual art that contains a lot of our cultural values. It is an art form that stands as a symbol of our resilience as a people, and I wanted to pull inspiration from motifs from the works of the tribes within Treaty One and Treaty Three territory.

These florals sit within a parfleche pattern surrounded by various references to Indigenous astronomy. The first symbol — starting from the outside — denotes clouds, with the two black triangles joined at their side. Next, three feathers have been shaped into harebells, representing the earth, sky, and water.

Lastly, the two triangles touching at the apex refer to the Milky Way or the path to the spirit world. So, to summarize, we gain knowledge about the Universe that we physically exist in as spirits having a human experience through the stars.

A large focus of Red River Co-op’s truth and reconciliation work so far has been on educating ourselves at all levels of our co-op – from executive to frontline staff. With the installation of these land acknowledgement signs in our locations, and in honour of June being National Indigenous History Month, we’d also like to share some of our learnings on Indigenous peoples included in the acknowledgement.

The Anishinaabe are a group of culturally related Indigenous peoples present in the Great Lakes region of Canada and the United States. They include the Ojibwe (including Saulteaux and Oji-Cree), Odawa, Potawatomi, Mississaugas, Nipissing and Algonquin peoples. The Anishinaabe speak Anishinaabemowin, or Anishinaabe languages that belong to the Algonquian language family.

At the time of first contact with Europeans they lived in the Northeast Woodlands and Subarctic, and some have since spread to the Great Plains.

The word Anishinaabeg translates to "people from whence lowered,” or "the good humans,” meaning those who are on the right road or path given to them by the Creator Gitche Manitou, or Great Spirit. The Anishinaabe believe that their people were created by divine breath.
Anishinaabe is often mistakenly considered a synonym of Ojibwe. However, Anishinaabe refers to a much larger group of tribes.

The Oji-Cree are a First Nation in the provinces of Ontario and Manitoba, residing in a narrow band extending from the Missinaibi River region in Northeastern Ontario at the east to Lake Winnipeg at the west.

The Oji-Cree people are descended from historical intermarriage between the Ojibwe and Cree cultures, but are generally considered a nation distinct from either of their ancestral groups. They are considered one of the component groups of Anishinaabe, and reside primarily in a transitional zone between traditional Ojibwe lands to their south and traditional Cree lands to their north. Historically, the Oji-Cree were identified by the British and Canadian governments as "Cree." The Oji-Cree have identified with the Cree (or more specifically, the Swampy Cree) and not with the Ojibwe located to the south of them. Traditionally, they were called Noopiming-ininiwag (“People in the Woods”) by the Ojibwe. Their language and culture also derive from mixed Ojibwe and Cree traditions.

The Cree are a North American Indigenous people. They live primarily in Canada, where over 350,000 people are Cree or have Cree ancestry. The major proportion of Cree in Canada live north and west of Lake Superior, in Ontario, Manitoba, Saskatchewan, Alberta and the Northwest Territories. About 27,000 live in Quebec. In the United States, Cree people historically lived from Lake Superior westward. Today, they live mostly in Montana. The documented westward migration over time has been strongly associated with their roles as traders and hunters in the North American fur trade.

The Dakota (Sioux) historically occupied what is now western Ontario, Manitoba and eastern Saskatchewan. During the War of 1812, they pledged their alliance to Britain, in return for oaths of perpetual obligation. This alliance was betrayed at the Treaty of Ghent (1814), when Britain abandoned its Indigenous allies as a term of peace. The Dakota then drew closer to their lands in the United States; however, though land use in Canada decreased, the northern territory was never abandoned.

The Dakota have since been treated as political refugees by Canadian governments. They were not included in treaty negotiations, as were all other Plains Indigenous populations, and were expected to make their own future in Canada. Over the years this has meant less land for reserves, less support for economic development and less access to opportunities. The Dakota became commercial farmers, producers of specialty crops, woodworkers, cattle ranchers, small-scale resource exploiters and labourers, traditions that are carried on today.

The Dene people inhabit the northern boreal and Arctic regions of Canada. They speak Northern Athabaskan languages, with “Dene” being the Athabaskan word for "people." Dene are spread through a wide region. They live in the Mackenzie Valley (south of the Inuvialuit), and can be found west of Nunavut. Their homeland reaches to western Yukon, and the northern part of British Columbia, Alberta, Saskatchewan, Manitoba, Alaska and the southwestern United States. Dene were the first people to settle in what is now the Northwest Territories.

The Métis community is quite new comparatively. They inhabit Canada's three Prairie Provinces, as well as parts of Ontario, British Columbia, the Northwest Territories, and the Northern United States. They have a shared history and culture and are of mixed Indigenous and European (primarily French) ancestry which became a distinct group through ethnogenesis by the mid-18th century, during the fur trade era. Métis is the French term for "person of mixed parentage" and derives from the Latin word mixtus, "of mixed" race. 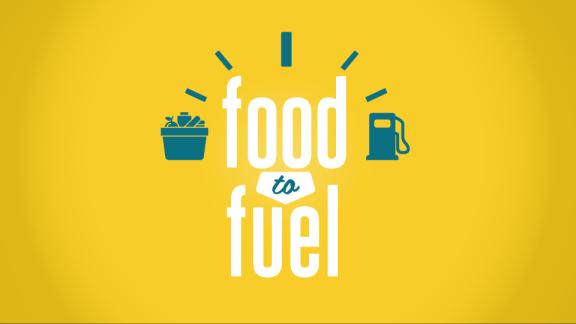 Local
Food to Fuel is back! 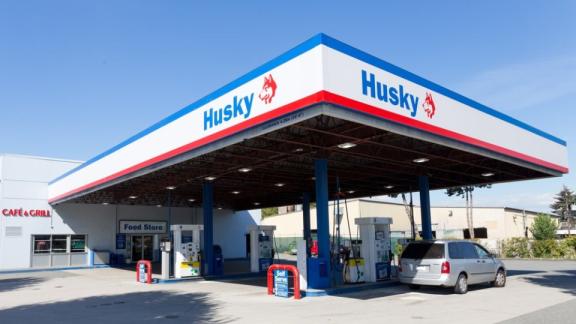 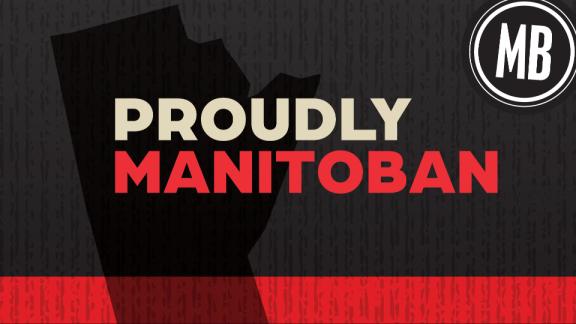